A Life Exposed | A Documentary Film

Lesley is an independent documentary maker in radio and film, with a specialisation in India.  Her short documentary film Mogadishu Dreaming has screened at major international film festivals, and her radio documentaries have been broadcast on ABC Radio National, BBC, Radio Netherlands Worldwide and WINGS.

She undertook a Department of Foreign Affairs-sponsored media residency in 2012 at Jamia Millia Islamia University in New Delhi to develop the film A Life Exposed: Robyn Beeche, under the mentorship of renowned Indian feminist filmmaker academics Sabeena Gadihoke and Shohini Ghosh. She also received Prime Minister’s Australia Asia Endeavour Award to undertake research in India over 18 months for her master degree in anthropology. Lesley has directed and produced campaigns for not-for-profit organisations in Australia and India.

With more than 30 years’ experience in the film and television industry, Jessica is a multi-award winning producer and director of factual programs, and the CEO of Iris Pictures. Jessica was awarded the 2003 Centenary Medal in recognition of her outstanding contribution to documentary in Australia, received an Australian Writers Guild Award (AWGIE) for Public Broadcast documentary, and has been short-listed for numerous other awards.

Liam has has produced award winning short drama films and long-form documentary.  He brings to the role of Producer over twenty years experience in television, commercials and feature film, primarily as an Assistant Director but also as a Scheduler and Location Manager.  Liam has worked in Australia, the UK and other countries, which has provided him with extensive international  production management experience and a wide range of professional industry contacts.   He has worked mainly in drama – both long and short form – but also in comedy, documentary reality and docudrama.  Liam has also worked as a teacher of both Creative Producing and Assistant Directing at UTS and at several film schools in Sydney.  Working with Executive Producer Jonathan Page of Bonsai Films and Writer & Director Eve Spence, Liam is developing his first feature Truesong.

Bonnie is an award-winning cinematographer working across the fields of drama, documentary and commercials. She shot the feature films My Tehran for Sale (2009) and Venice (2012), second unit on The Slap, Somersault and Beneath Clouds, and video artist Angelica Mesiti’s Rapture, which won the Blake Prize for religious art. She has over forty short film credits, and her films have screened at major international film festivals, including Berlin, Montreal, Palm Springs, Hamburg, Chicago, IDFA, Vancouver, Toronto, Rotterdam, Sydney and Melbourne. Bonnie has won numerous gold, silver and bronze ACS Awards, and she was the recipient of the Rising Talent Award at the 2007 IF Awards.

Lindi is an editor of award-winning documentary, drama and arts programmes for local and international broadcast and cinema release. She edited Salt, a documentary which has received 17 awards, including International Documentary Association, MIFF, Atlanta and AFI/Discovery Channel Silverdocs. Lindi’s work on feature length documentaries includes The Snowman, which won Best Australian Documentary at the 2010 Sydney International Film Festival, and the award-winning 4, On Borrowed Time, and Virtuosi. She has edited a range of programs for television broadcast including several one-hour documentaries, Blank Canvas, The Healing of Bali, Eyes of the Tiger, and episodes On the Trail of Genghis Khan, Tribal Life for Discovery and Creative Minds.

Kenny has cut numerous offbeat short films that have screened at international festivals, and is currently editing the feature film, Drown. He edited renowned choreographer-turned-director Meryl Tankard’s short film Moth, which has screened at Cannes, St Tropez, Prague and St Kilda. He also cut Jamie Lewis’ Ravage, which screened at Sydney Film Festival, and Nicholas Waterman’s From Here, which was part of Australia’s premier short film festival Flickerfest and was shortlisted for the editing award at St Kilda Film Festival. In documentary, he edited Kelli Jean Drinkwater’s award-wining Aquaporko, which has screened at major festivals in Toronto, San Francisco and Sydney, and cut A Life Exposed for ABC TV’s Artscape slot. Dean Francis’ Drown – a film about bullying in Sydney’s surf life saving community – is his first feature film. Kenny graduated from AFTRS three years ago, and he also has a BA in media and communications. He is attracted to unconventional narratives, meaningful stories and collaborations with like-minded filmmakers. He likes cooking noodles and sweeping floors when he needs to think through narrative problems. When he finds solutions, he likes to eat cake and buy Japanese fashion online.

Nicole Skeltys is an established Australian musician, composer and writer who has released eleven albums of her own music (including on major labels), in styles ranging from electronica to psychedelic folk, rock and country. Along the way, she has also written songs and soundtracks for film, TV and theatre – from world beats for Lonely Planet TV travel series to chamber music atmospheres for Parisian fashion shows. Her electronic duo B(if)tek (1996-2003) were described as ‘Australia’s greatest electronic music innovators’. As part of B(if)tek, she toured with the Beastie Boys, recorded with legendary TV show Twin Peaks chanteuse Julee Cruise, played sell out shows at the Sydney Opera House, and was nominated for an ARIA, Australia’s equivalent of a Grammy Award. Nicole’s latest album ‘Citizens United’ (2013), is a multi-genre compilation of material from herself and various collaborators.  More sounds, videos and info about Nicole can be found at: www.nicoleskeltys.com

Nicole and long-time buddy and collaborator Byron Scullin jointly composed, recorded and produced the soundtrack to A Life Exposed. Bryon is a composer, sound designer, music producer and engineer, working in film, TV, dance, theatre and radio. He is a mastering engineer at Deluxe Mastering in Melbourne, and lectures in sound at RMIT. See more on his website: www.byronscullin.com 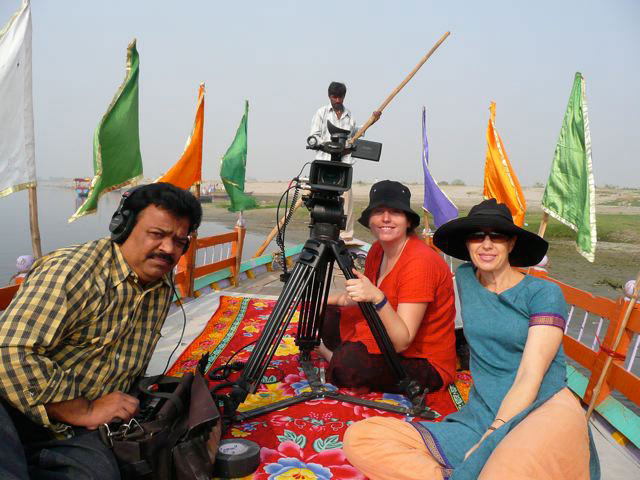